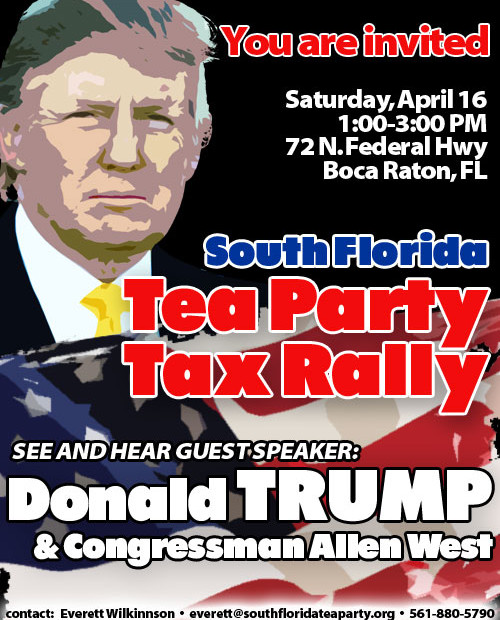 This is one odd presidential election cycle. It is hard to believe that Donald Trump has become a darling of the Tea Party.

There is nothing in Trump’s background that would suggest he should be this popular with a family values, economically thrifty, Tea Party supporter.

Trump is on wife number three. His gaudy lifestyle certainly does not suggest thrift, and when he speaks about issues it is clear that it has been many years since he read a book.

And there could be no more unlikely political pairing than Donald Trump and Allen West?

Trump showing up in Boca Raton on Saturday – 20 miles from his Mar-a-Lago Club and penthouse – is a great hit for the South Florida Tea Party.  Trump’s appearance guarantees a lot of attention for the gathering.

Here are the latest details from an email sent out by the group Wednesday night:

Patriots, we are only three days away from hosting our biggest Tax Day Tea Party! And we’ve got two other sign-holding, hand-waving, tax-hating rallies to excite everybody before the big day.

Friday, we’re holding rallies in Fort Lauderdale and Miami. The Fort Lauderdale rally will consist of a sidewalk protest in front of the Federal Court House, at 299 E. Broward Blvd., from 4 p.m. to 7:30 p.m. The rally in Miami will take place from 5 p.m. to 7:30 p.m. in front of the Miami Post Office, 2200 N.W. 72nd Ave. Taxpayers will honk when they drop off their tax forms.

Saturday, get loud in Boca Raton as real estate mogul Donald Trump will be our keynote speaker for our Palm Beach County Tax Day Tea Party. A successful businessman, author and host of the television show “The Apprentice,” Trump — whom many consider a likely presidential candidate — will join us in rallying against fiscal irresponsibility and telling Congress, “You’re fired!” The free event is held at Sanborn Square Park, 72 N. Federal Highway in Boca Raton and runs from 1 p.m. to 3 p.m. Arrive early, because we expect a large crowd.

WFTL conservative radio host Joyce Kaufman will emcee our Boca Raton rally as Patriots share their concerns about federal spending, taxes and the economy — and what Americans can do about it. Some of our other speakers include:

Show us your spirit!

The slogan for this year’s three Tax Day rallies is “The Tea Party Has Just Begun!” to remind politicians that Tea Party Patriots aren’t going anywhere if Congress doesn’t end its practice of out-of-control spending.

How will you express that message at our rallies?

No matter which one you attend, bring your best signs, your most patriotic outfit and your loudest voice. Show us what you’ve got!

As always, thanks for all you do!
In Liberty,