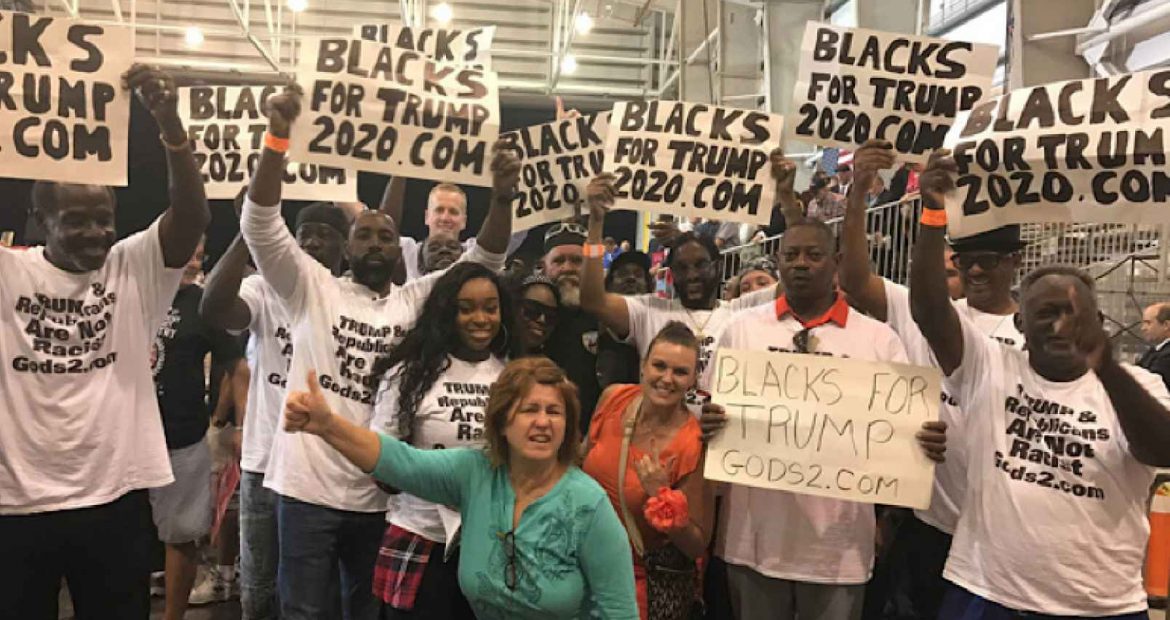 President Trump is standing with the 72% of African-Americans who are happy with their local police departments.

Daniel Greenfield, a Shillman Journalism Fellow at the Freedom Center, is an investigative journalist and writer focusing on the radical Left and Islamic terrorism.

Leftists have launched yet another campaign to destroy President Trump, the economy, and the hopes of the African-American community which had been seeing record employment numbers.

If you believe the media, African-Americans are rising up against President Trump because of a police incident in Minneapolis, a Democrat city, run by radical lefties who voted to disband the police, in Minnesota, a Democrat state, which had not voted for a Republican since Nixon, over 1,000 miles away from Washington D.C. And, if you believe the media, the economy is doomed, and every state that opened before the riots has streets filled with piles of the pandemic dead.

The latest Rasmussen tracking poll shows that President Trump’s approval rating among likely black voters is at 41%.That’s up from 40% in the fall of 2018 which had been a high at the time.

How is that possible? Aren’t black people furious after Trump’s call for law and order?

Only 5% are very dissatisfied.

Why is the country burning and why are so many politicians, corporations, and organizations falling into line to sate the outrage of that 5%? Ask them if you can find them inciting a riot.

By backing law and order, President Trump is standing with the nearly 3 in 4 African-Americans who are happy with their local police departments over the less than 1 in 5 who aren’t.

Why do these numbers about what African-Americans actually believe differ so dramatically from what the media insists on telling us that they believe in order to justify the riots and looting?

41% of African-Americans reported that they had an experience where a police officer had helped keep them or their family members safe in a dangerous situation.

That’s significantly higher than the 33% of white people and 21% of Hispanic people.

Black communities benefit from law enforcement more than other communities do. Many of the stores that were ransacked and looted were owned by African-Americans. And they’re much less likely to be able to rebuild than massive national chains like Target or CVS. The collapse of cash businesses and businesses that provided local credit will devastate these neighborhoods.

While the media has been busy championing the radical protests to defund the police, 167 people were shot in one week in Chicago, 14 people were shot over the previous weekend in Baltimore, and a 12-year-old was shot in St. Louis. No one but the police is going to stop this.

Defunding the police is the project of a small number of wealthy young radicals who have never lived in a world without the police and have no idea what can happen to them without the cops.

Black people who live in poorer areas know exactly what can and does happen every week.

That’s why President Trump’s call for law and order, and his march to a besieged church, may have infuriated white radicals, especially in the media, but is understood differently by many black people. The history of fighting crime in America has undergone its own radical historical revisionism that might be dubbed the 1960 Project as a counterpart to the 1619 Project.

The contemporary state of the police and prisons wasn’t invented by white people, but the result of demands by black community leaders who wanted a crackdown on drugs and crime.

In 1973, 71% of African-Americans in New York wanted drug dealers to be sentenced to life in prison without parole. That was back when the NAACP Citizens’ Mobilization Against Crime had asked for more police officers in black neighborhoods and a minimum of 5 years in prison for muggers, 10 years for drug dealers, and 20 years for murderers.

“It is not police brutality that makes people afraid to walk the streets at night,” Vincent Baker, the head of the Citizens’ Mobilization Against Crime, had said.

Meanwhile, black residents were buying guns and forming vigilante groups to protect their own  streets. Ministers and black nationalists stepped into that vacuum to go after drug dealers.

“The silent majority in Harlem would welcome a police order to get tough,” Baker had pleaded. The alternative, he had previously argued, would be vigilante justice. “We don’t need gunslingers, paid or unpaid, in our community. We want law enforcement.”

Crime debates in the 1960s pitted white liberals, who favored looser crime rules, against black community leaders who were ready to call for the vigilante killings of drug dealers. Putting police officers on every block was not a racist conspiracy, it was the demand of neighborhood leaders who wanted to avoid the bad choices between drug gangs and community vigilantes.

President Trump knows this history and lived this history. That’s why he stands for law and order. Law and order isn’t racist. When it collapses, its victims are very often African-American.

“The biggest victims of the rioting are peace-loving citizens in our poorest communities and as their president, I will fight to keep them safe,” President Trump declared. “I will fight to protect you. I am your president of law and order.”

While the media has falsely claimed that he was threatening to repress the black community, Trump was really reminding African-American voters of the difference between him and Biden.

Biden might be happy to watch America burn as long as his radical allies were satisfied, but the black communities and businesses that are burning are likely to be less enthusiastic at the idea.

The media has suggested that President Trump’s call for law and order is somehow radical.

Fighting crime, like supporting the military or free speech, used to be a bipartisan issue before radicalized Democrats defected from what had been a fundamental plank of national policy.

Democrats keep trying to tie Trump’s call for law and order to Nixon. But it’s actually LBJ who declared a war on crime and who federalized law enforcement, tying local police into the DOJ, and supplying them with military equipment, while emphasizing statistics and metrics.

“Our parks are deserted. Our storekeepers weigh the dangers of arming themselves against the dangers of attack. Crime and violence in the suburbs increase even more rapidly than in the central cities,” President Johnson had vowed. “Until every woman in this land can walk the streets of her city at night, unafraid and unharmed, then we have work to do in law enforcement.”

Like the rest of the Great Society, Johnson’s War on Crime failed because it assumed that running local policies through a national expert class would make them more efficient, and, the Great Society’s other great fallacy, that social problems could be solved with social welfare. Instead of defeating crime, the Great Society created the welfare state and made blight permanent, reducing formerly aspirational black communities to a morass of broken homes.

Had LBJ sought to deliberately destroy black communities, he could not have done better.

Johnson’s War on Crime was a response to race riots, but failed to address the reality that the riots, like most race riots in the previous century, had been inspired by first Communist, and then assorted other leftist agitators, of which Antifa is just one of many incarnations.

Defunding the police is a demand to shift money from law and order to the welfare state.

The riots are, in a certain sense, a civil war for the soul of the black community. If the rioters succeed, black communities will sink deeper into gangland decay and the welfare state. They will become more integral to the Democrats even as they lose any hope for a better future.

That’s why law and order African-Americans stand with President Trump.