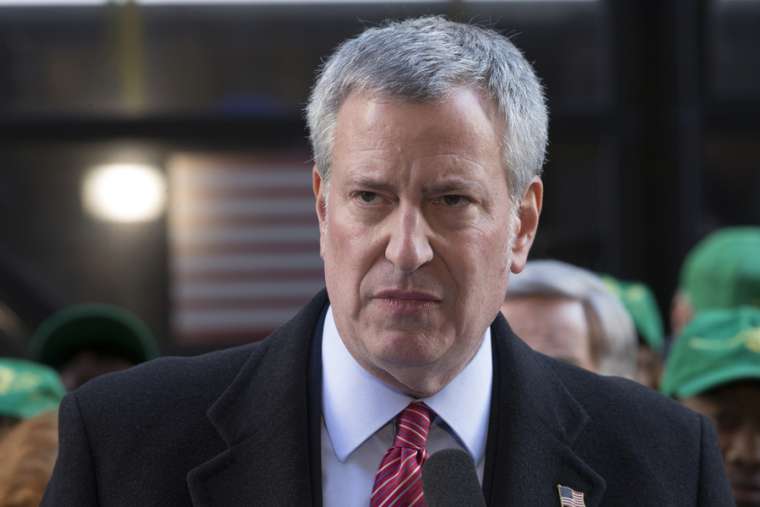 CNA Staff, Mar 30, 2020 / 10:00 am MT (CNA).- New York City Mayor Bill de Blasio on Friday, March 27 threatened to “permanently” shut down houses of worship that continue to hold public services in violation of the city’s ban on gatherings of any size.

The mayor cited a “small number of religious communities, specific churches and specific synagogues,” that are continuing to hold religious services despite a prohibition on anyone being within six feet of a person they do not live with. The restrictions were made in an attempt to stop the spread of the novel coronavirus, or COVID-19, which has infected thousands of New Yorkers and has killed over 1,000 people in the state.

De Blasio warned that if these communities were found to be holding religious services, “our enforcement agents will have no choice but to shut down those services.”

The religious congregations would also be subject to other punishments for continued defiance of the stay-at-home order, de Blasio added. This “additional action” that would be taken includes fines, as well as “potentially closing the building permanently.”

Catholic churches in the Archdiocese of New York and the Diocese of Brooklyn, which cover all five boroughs of New York City, suspended the public celebration of Mass on March 14 and March 16, respectively. New York’s “stay-at-home” order was issued on March 22, and was recently extended through April 15.

De Blasio’s threat to shut down religious buildings “permanently” provoked criticism from religious liberty experts, his legal authority to do so.

The First Amendment of the United States Constitution states that “congress shall make no law respecting an establishment of religion, or prohibiting the free exercise thereof.” Further, the New York State Constitution states, “The free exercise and enjoyment of religious profession and worship, without discrimination or preference, shall forever be allowed in this state to all humankind.”

“Mayor de Blasio surely didn’t mean what he said, because there’s no way he or any other government official would ever have the power to shut down a church, synagogue, or mosque permanently,” said Mark Rienzi, president of the Becket Fund for Religious Liberty.

Rienzi said that, given the context, the mayor “appears to be talking about the temporary need to ensure proper social distancing in a time of crisis,” which Rienzi said was a “valid governmental interest.”

Rienzi called the phrasing of de Blasio’s comments “unfortunate,” and said they were not helping to soothe the fears of religious groups, particularly as those same religious groups are providing emergency relief work to those impacted by COVID-19.

“Right now, we need religious groups and the government to continue working together to keep everyone as safe as possible,” said Rienzi. “The First Amendment will protect against any needless targeting of religious groups in a time of crisis.”