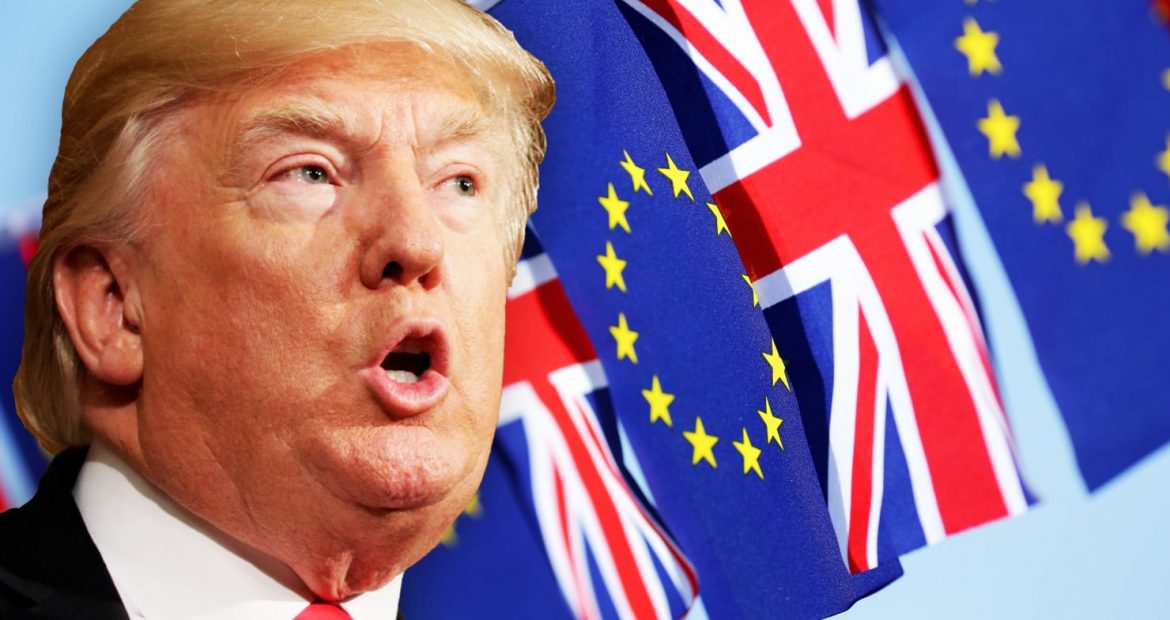 – Brexit in name only, cannot be allowed to happen. Theresa May is a Remainder and has proved herself to be a totally ineffective prime minister. She cannot interact on the world stage.

At Davos she should have given a tub-thumping speech, like Trump, to say that Britain is open for business, we are moving towards a low taxation economy, favorable to business and employers. We have high employment with a high skilled economy. We are a nation open to ideas, people and innovation. Our doors are open to those that have the skills to make our country great again.

Instead, we got a damp squid speech from a woman that is incapable of inspiration or negotiations. I met Mrs. May on a number of occasions and each time all the people she addressed said the same: cold, indifferent, heartless, uninspiring and … as David Davis MP, the man in charge of Brexit said to me, “we don’t know what she stands for.”

He’s right, and we still don’t. The EU is breaking up before our eyes so she can be bold. Italy will elect an anti-EU government in March. Marine Le Pen in France is Macron’s opposition, in Holland, Geert Wilders’ party is the official opposition. The Nordic countries are voting for conservative governments, all anti-migration. The Visegrad four are being joined by a Eurosceptic Austria, who also want to close their borders, and so, it goes on.

We have the EU Commission (unelected band of old men and gender quota women) who decide our laws and have decided that Poland, with its right wing, anti-migrant and close the borders government, should be taken to court and penalized for their ‘anti rule of EU law’ actions, even though they were elected by the Polish voters.

The same is happening in Hungary. Greece is the basket case of Europe with nearly 50% unemployment and a bankrupt country with people starving but held to ransom by Brussels. There is a quiet revolution going on, fueled by the support of President Trump.

When I was in DC recently, I met Wilbur Ross, sec of state for commerce, who told me that if the UK wants a trade deal with the US, we should not take the poison pill of a bad deal that will be offered by the EU. He told other MEPs in the room that the EU was basically a protectionist racket that didn’t understand trade. I was the only European to give him a standing ovation. He’s right, with US backing, Britain can be great again and lead the way to bring down the EU so that all nations can take back control of their borders, sovereignty, lawmaking, and control of migration. To become nations for free trade and co-operation, to make Europe great again.

Very disappointing negotiations on Brexit. Trump is right about Theresa May not being resolute enough. She should be taking a realistic and defiant ‘Churchillian’ stance. Key is ‘drain our swamp’ that means Ministers are controlled by Civil Servants. This is the main problem around Brexit – negative attitudes and resistance to change by senior civil servants/the UK Deep State. They want to delay, softening and if possible reverse Brexit. It is important to have ~US administration support.

The “rebellion” against the Mandarins and the weak Prime Minister will be triggered by the recent scandal of Carillion denouncing the deliberate rejection of solution to trigger SME’s jobs, jobs, jobs through domestic production in view of bilateral trade deals.

Chris Poll is now consulted by Conservative Policy Study Group, a number of MP’s (Priti Patel, Jacob Rees Mog, Labour/Opposition Shadow Business Secretary, etc…) on how SMEs can generate growth and jobs. His stance is the only way UK – or even the USA – can empower SMEs is if they have a new source of working capital from outside the UK/USA banking system.

Chris Poll’s solution bypasses Dodd/Franks and is key to Trump achieving his goals.

The former Head of UK Government Procurement Services who is now in charge of re-organizing the USA’s US$300 BN procurement services, believes working capital for US SMEs is fundamental to not just more effective and efficient procurement but to US job generation and regional growth.

It is starting, here’s a hint today in the Telegraph – Boost Britain’s Small Businesses to avoid another Carillion and The rise of retooled PFI from the rubble of Carillion’s collapse.

“But for any real change there needs to be a fundamental shift in the way the Government approaches the provision of its public services, especially when it comes to small businesses,” argues industry expert Chris Poll.

The serial entrepreneur, who jointly created the UK’s USM – now the Alternative Investment Market (Aim) – in 1980 to provide new sources of finance to young businesses, claims he proposed a financing solution to the Cabinet Office more than three years ago, but it was rejected.

His scheme would enable the Government to work directly with small businesses to commission services, rather than relying on a small number of huge companies who then engage subcontractors.

Poll’s idea was to set up a purchase order finance scheme that provides low-cost capital to small businesses, reducing risks in the public-sector supply chain because it lessens the chances of suppliers becoming insolvent through cash flow shortages.

Currently, small businesses have trouble bidding for contracts because they have no available working capital, meaning they fail due diligence tests.

As an extra safeguard, companies accessing the loans would be required to apply to the commercial insurance market for supplier insolvency insurance, Poll suggests.

“This solution would also mitigate 95 pc of the domino effect of Carillion down the supply chain,” Poll said.

However, the proposal was rejected by John Manzoni, the country’s top civil servant, on the basis that the risks to the Government outweighed the reward. Poll says he has renewed his efforts to encourage.